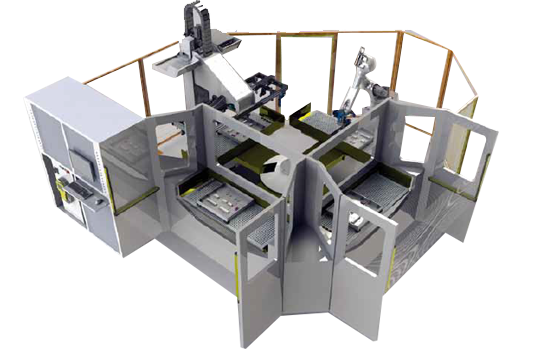 It is the element dedicated to the rapid and precise transport of the pieces from station to station for the various operational phases envisaged. The rotation is electrically operated and is equipped with a number of worktop units as many work stations as expected.

Allows the flexibility to implement the operating modules in the various stations, by type and position, respecting the various phases of the desired assembly process.

One station is dedicated to the wiring robot equipped with the wiring head SYNDY.

The choice of the number of operating stations determines the number of carriers arranged on the rotary for the transport of the pieces.

The standard carriers proposed are the universal type, which allow a quick and easy setup: reference and fixing magnets elements for the luminaire to be processed are easily positioned without tools in connection of the holes matrix on the plane.

Universal carriers can be integrated or replaced by customized equipment made according to the required production processes.

The system working area is delimited with physical protections. Access doors equipped with electrical safety bolt  and a photoelectric barrier in the loading / unloading area inhibits the automatic operation of the system during the presence of the operator.

The process is fulling managed by a supervisor PC with optimized user interface, easy diagnostic system and quick program change.

In configurations with more than 2 stations, one can be used for the electrical testing of the assembled luminaire in compliance with current rules.

The multi-station versions offer the opportunity to start even with only one part involved and subsequently integrate additional operating modules according to an increase in production demand or decision to automate further stages of the assembling process.

The choice of the number of stations, depends on the required operating modules and the setting oriented to efficient production of small batches or large quantities.